How Devil’s Peak Got its Name: What You Need to Know about Windy Days in Cape Town! 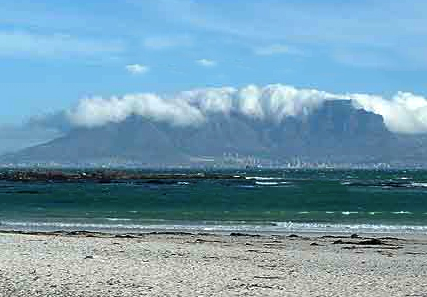 It’s the time of year when the wind blows great guns in Cape Town – just on some days, though. Clouds spill down dramatically over the great Table Mountain that has been the Mother City’s signature feature for centuries.  When the good old South-Easter tugs at hemlines and hairdos and we see the tablecloth descending over the mountain, we have a favourite story that we tell.

It’s about how Devil’s Peak got its no-nonsense name – Devil’s Peak is the smaller chunk to the left of Table Mountain when looked at from the direction of the V&A Waterfront.

Once upon a time very long ago, long before we had the wonderful V&A Waterfront development, there lived at the Cape a formidable pirate from Holland whose name was Jan Van Hunks. Van Hunks had reached the end of a chequered career of plunder at sea, and he had retired to a better life on the slopes of majestic Table Mountain.

It was his way to while away the hours at his favourite spot on the mountain, smoking his pipe and enjoying the view – and isn’t it just great!

One day, as he sat smoking at his special nook, he met a man in black, with a large black hat covering his face. To be cordial, Van Hunks went and sat beside the man, took out his pipe and began to smoke. The stranger took out his pipe and followed suit, saying, “I’ll wager that I can smoke more than you.” Now Van Hunks was a confident smoker, and so willingly accepted the wager.

The contest began and huge clouds of smoke billowed up around them and spilled down like a tablecloth over Table Mountain. Van Hunks persevered until the stranger finally set down his pipe in defeat. And he revealed himself to be none other than the devil!

And so, for ever more when the clouds cascade over the mountain, we sit down here and speculate whether Van Hunks and the Devil are having a smoke.