The Spotted Eagle Owls at Kirstenbosch: A Few Weeks in the Life of … 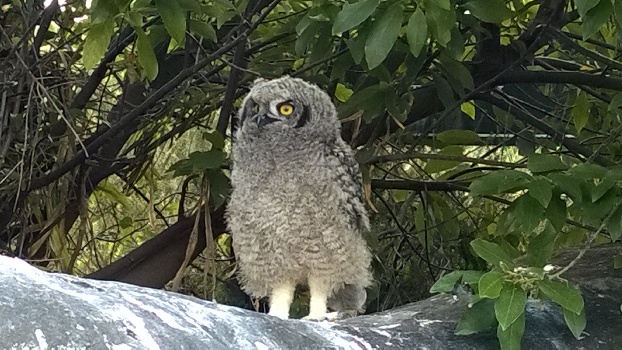 The breeding pair of Spotted Eagle-Owls who, for some years, have been nesting and rearing their young at their favourite spot in Kirstenbosch National Botanical Gardens in Cape Town, are one of the many wonders of this exquisite garden. It was a sunny late-September morning when we first met the pair of owls and their two still-new baby owlets – at that stage mere fluffy snips – in the fynbos area of Kirstenbosch, above the Cycad Amphitheatre. We had walked the Boekenhout Trail that morning, and after exiting the forest were ambling along the Camphor Avenue when we made our lo-and-behold discovery: first we saw Mr Spotted Eagle-Owl keeping watch up in a tree, and then the magical sight of Mrs Spotted Eagle-Owl sitting in the hollow of a large rock, sheltering two incy-wincy owlets under her safe and ample wings …

It was breathtaking, and a great gift on a shining, first-of-summer morning. Since then, we have visited the owl family once- or twice-weekly. And like self-appointed great-aunts, we have ooh’ed and aah’ed at every developmental juncture, relishing the rapid steps of their growth. And we’ve met so many people up at the nest, doing the very same thing! Some people have been seeing these owls raising their young at the same spot in the gardens for several years.

Life – in Pictures – with the Kirstenbosch Owls and Owlets

Spotted Eagle-Owls are known to breed fairly close to people. This is certainly the case at Kirstenbosch, where they’ve chosen quite a busy “thoroughfare-point” in the gardens as their nesting site. Perhaps, as a bird club member suggested to us, they weigh up the disadvantages of the “people-paparazzi-syndrome” with the advantages of feeling a little more safely positioned away from predators. They do also seem to like rocky “homes” for their childbirth and rearing rituals.

The owls have become huge celebrities at Kirstenbosch. The downside, though, of having the owls and owlets nesting where many people can reach them, is that the crowds must surely be overwhelming at times. Eager owl-gazers tend to crowd the site for pictures, sometimes at too-close quarters and sometimes in large groups. Spare a thought for the owls, stand back a bit and remember that the process of parenting is a time of “cocooning” and all creatures, most surely, are entitled to privacy, respect and safety for themselves and their young. Bear in mind that the owls will attack if they feel threatened by too-close approaches.

My What Big “Ears” You have

Spotted Eagle-Owl have prominent tufts of feathers on either side of their heads, rather like little ears. But the ear tufts, in fact, have nothing to do with ears or hearing, but are merely bits of “body bling” – they’re there just for show!  More about the owls.

Spotted Eagle-Owls are nocturnal and hunt at dusk and after dark. That said, however, we once saw Mr Owl swoop into the nest at around midday to deliver a mouse for the children. With two extra hungry mouths to feed, Dad is probably obliged to expand his breadwinning routines. The owl menu can include beetles and crickets, mice, rats, squirrels and mole-rats, lizards, frogs and sankes, and birds – including
Laughing Doves, Francolins and Helmeted Guineafowl chicks.

Spotted Eagle-Owls pair for life. While the female incubates the eggs – usually 2-4 of them, her mate brings food to the nest. Two chicks per brood are the norm, though sometimes three and very occasionally four. The Kirstenbosch pair usually raise two chicks per year. During the first weeks Dad was always up in a tree nearby, but once the chicks were about four weeks his presence was less obvious. Owl chicks are able to stand at three weeks old, and once that’s accomplished, they become curious and start exploring the nest site. At about six weeks they venture a tad further afield, and roam short distances close to the nest. At this juncture Mum Owl loosens her maternal grip a little, and gives them some play-space by leaving the nest and sitting up in a tree. Don’t be fooled, though, she’s keenly watching the situation and will protect her young if need be.

The youngsters start testing their wings in some very cute trial-and-error endeavors at around six weeks, preparing themselves for future prey-catching escapades. The family unit stays snug and close for several months, until the younsters reach complete independence at about four months. It’s at this time that the young owls move off to find their own beat. They reach full maturity at one year old and live for up to a dozen years.

In some cultures owls – and in particular their hooting – is considered a harbinger of death, or associated with dark powers. Far preferable is the West’s tendency to associate the owl with wisdom. But be all this as it may, it’s special beyond words to track the family life of the Spotted Eagle-Owls at Kirstenbosch in the weeks after new kids have appeared on the block.