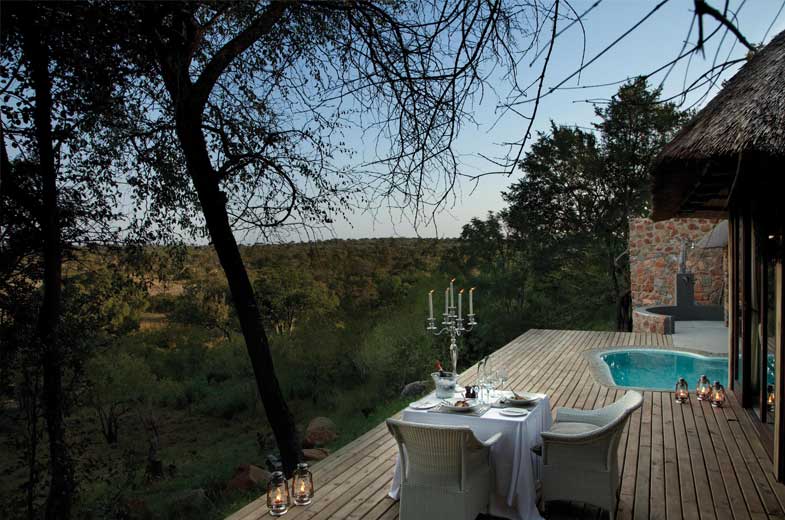 South Africa has dozens of idyllic settings and lodges for an exceptional honeymoon in the abundant lap of luxury. Starlit bath tubs, his-and-her body treatments in beautiful spas, sleepouts on gorgeous private decks in the wilderness, dinners for two in remote bush locations or at the edge of a lake or ocean – these are just some of the sublime experiences that await honeymooners in a country of innumerable attractions.

This is a region of spectacular scenery, tranquil country hideaways and vast wilderness spaces in South Africa. The Kruger National Park wildlife world is a part of this area. Luxury safari outposts are popular honeymoon choices. In addition to offering the excitement of a Big Five safari, high-end safari lodges also offer honeymooners the rare luxury of total privacy in secluded settings.

Limpopo Province is another region of prime safari territory, including the northern part of the Kruger National Park, the Timbavati Reserve, the very scenic Waterberg region and several well known private game reserves including Thornybush and Kapama.

Bordering Botswana, South Africa’s North-West province also incorporates extensive tracts of wilderness. The large Madikwe Game Reserve and the Pilanesberg Game Reserve with its scenic extinct volcano are both wonderful options, and areas that carry no risk of malaria.

The mother city of Cape Town is staggeringly beautiful. Hikeable mountains, protected nature reserves sheltering masses of colourful fynbos, pristine beaches and forests and world-class drives make for endless holiday pleasures. Add to these a plethora of historic and cultural attractions and food experiences of the highest order, and you have an incredible destination for a honeymoon.

KwaZulu-Natal is a scenic kaleidoscope of warm ocean, beaches, surfing hot-spots, mountains and wildlife regions. The province has some supreme World Heritage Sites and numerous luxury lodges and hotels perfect for honeymooners.