The penguin colony at Boulders Beach in Simon’s Town, Cape Town, has grown in number since the mid-80s, and is currently in the region of 2 500 penguins. They are fascinating to watch, lumbering about with the distinctive black curve across their chests. Penguins are ancient birds, probably evolving about 65 million years ago, at the time that dinosaurs became extinct. The penguins at Boulders breed mostly between March and May, producing fluffy grey young yet to develop the black and white markings of their parents. 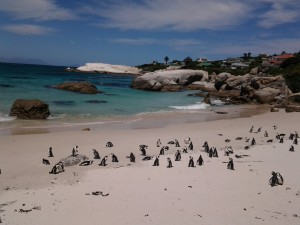