The West Coast National Park, 27 500 hectares in extent, is an hour and a half’s drive north of Cape Town. The magnificent Langebaan Lagoon, with its vast glistening surface and surrounding milk-white sands, is one of its most impressive features of the park, attracting birdwatchers who come to view hundreds of species including a population of flamingoes. The park is not only well known for its bird life, but also for its spectacular carpets of spring flowers which occur between August and October, particularly in the Postberg flower reserve section of the park. 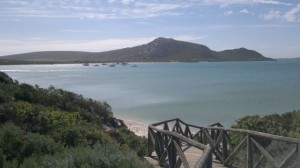