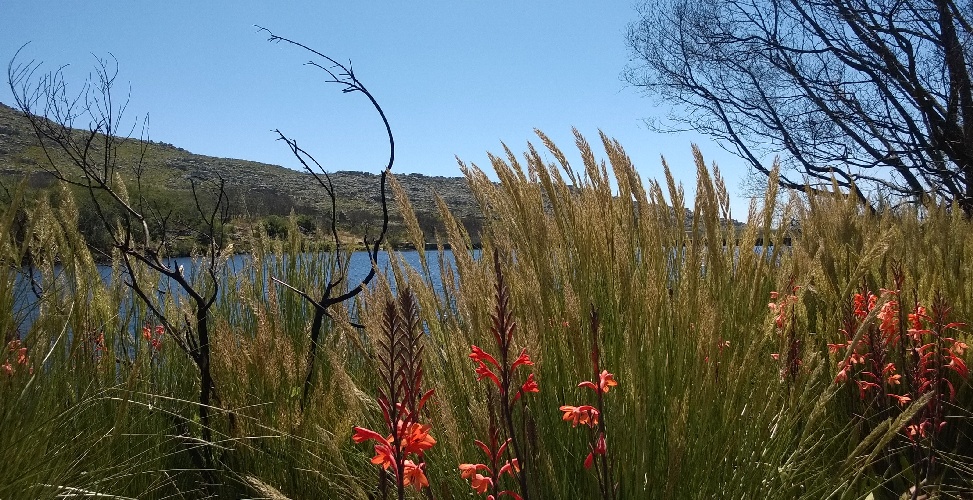 Silvermine West – the portion of the Silvermine Nature Reserve featuring the reservoir – reopened on 22 December 2015 – a wonderful pre-Christmas gift following a 10-month closure for rehabilitation after the March 2015 ‘Cape Fire’. As frequent visitors to the reserve, we had been eagerly awaiting the re-opening, and so we were there bright and early on the day the boom was finally lifted to welcome visitors back into Silvermine West …

Silvermine West forms part of the magnificent Table Mountain National Park. The March 2015 ‘Cape Fire’ caused a great deal of devastation, including many burnt tracts and fallen trees, damage to sections of the boardwalk around both the beautiful reservoir and along the popular River Walk. Many walkers had come to Silvermine West on the day of re-opening. In good spirits and thrilled to see the rehabilitation of the area, many of the walkers greeted one another with more-than-usual animation, some stopping to remark on nature’s miraculous restoration. The boardwalk around the reservoir has been repaired and is fully accessible again. We share some of our pics taken on a walk around the reservoir on the day of reopening – 22 December 2015.

How to get There

Access Silvermine West at Gate One: turn right off Ou Kaapse Weg coming from Cape Town. Stroll around the reservoir, enjoy a picnic, or hike to the cave called Elephant’s Eye or to Tokai Lookout for stunning views on the slopes of the Constantiaberg.