Cape Town: A Holiday Destination Second to None 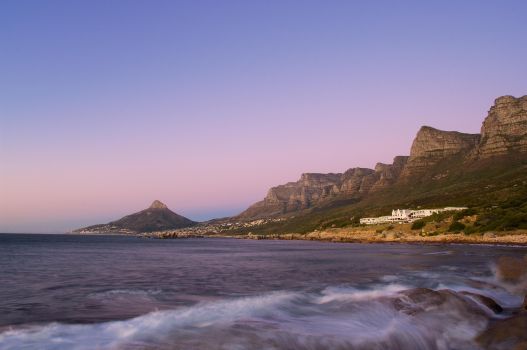 Cape Town needs to be a first-hand experience. This gorgeous city, snuggling up against the sturdy mother of all mountains, ranks with the most beautiful places on earth. Come and see for yourself what all the fuss is about.

The city and surrounds present a collage of different scenery. There’s the urban vibe and cosmopolitan feel of the Metropole; there are lanscapes of pastoral bliss and gastronomic delights in the Cape Winelands; and there are endless beaches to explore along both sides of the Cape Peninsula. Holidays in Cape Town can be as varied as your imagination will stretch.

A good time to be on holiday in Cape Town is in the summer between December and February, when the weather is at its best.

The Atlantic Seaboard is a fabulously luxurious holiday playground, including the elite suburbs of Bantry Bay, Camps Bay and Llandudno. Bantry Bay is a scenic and quiet suburb, allowing for easy access to the attractions of the city centre. Camps Bay is worshipped for its pristine beaches, vibrant nightlife and trendy restaurants. The exclusive small area of Llandudno features a magnificent beach tucked away amongst granite boulders. Hotels in the area include the impressive Twelve Apostles Hotel & Spa near Camps Bay.

The city is not too far away, and offers much of historical interest, such as the Natural History Museum, the District Six Museum and the Holocaust Museum. Markets such as the Church Street Antique Market and Green Market Square add a great deal of charm to the downtown area. Long Street and Kloof Street in the CBD have many boutique stores, restaurants and cafés, whilst the Victoria and Alfred Waterfront offers the best in trend shopping within easy reach of the city. Table Mountain, Cape Town’s most famous landmark, is accessible by high-tech cable car.

The South Peninsula stretches from Tokai to Noordhoek and is a mixture of heritage and coastal charm. It includes the surfing hot-spot of Muizenberg on the False Bay coast, and beautiful Simon’s Town, famous for its naval base and the idyllic Boulder’s Beach, a protected area for a resident colony of African penguins. Cape Point is the southernmost part of the Cape Peninsula and allows for superb views of the two oceans and surrounding mountains.

On the False Bay coastline Colona Castle Manor House in Lakeside offers old-world charm mixed with modern excellence and opulence. The Steenberg Hotel is situated inland in Tokai, surrounded by the beautiful forests, and is five minutes drive from the Constantia Wine Route. It has a world-class golf course of its own, along with an on-site winery producing award-winning wines, and a state-of-the-art spa.

The Cape’s Wine Routes are world famous and produce some of the best wines in the world. The Winelands includes the historic towns of Stellenbosch and Franschhoek. The Lanzerac Hotel and Spa offers guests accommodation in Stellenbosch in a 300-year-old Cape Dutch mansion with Spa facilities. These are also offered at Le Franschhoek Hotel & Spa, set in the culinary capital of South Africa.