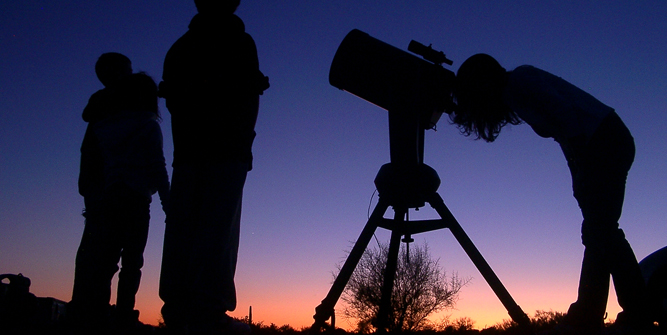 If the night skies intrigue and delight you, you’ll be right at home in South Africa where conditions are excellent for star-gazing.  There are several lodges set in  magnificent locations in the wilderness areas and elsewhere, where star-gazing is on offer to guests. We also introduce you to a phenomenal star-gazing destination in Namibia, the NambiRand Nature Reserve.

One of the reasons why South Africa is such a good place for star-gazers, is that here you can see the Southern Cross, Triangulum Australe (the Southern Triangle), Centaurus and several other constellations which are not visible in the Northern Hemisphere.  The night skies are especially clear during winter, which is a good time to visit South Africa if you’re a star-gazer.

Sutherland in the Northern Cape is probably the most celebrated of all star-viewing locations in South Africa. It’s the site of the South African Large Telescope (SALT) – and this is the place of all places to go stargazing in South Africa. Sutherland is known for a big five of a different nature – the Celestial Big Five! It gets extremely cold there, so be sure to take your warmest woolies.

Rogge Cloof in Sutherland is one of the great ‘stars of the show’ in Sutherland. The famous Star Plains of the Roggeveld are located exclusively on Rogge Cloof. Clear skies strewn with millions of stars at night, and vast plains home to wildlife, unusual plants and fossils, are features of the Rogge Cloof world. The area also boasts Salpeterkop, an extinct volcano and possibly the last volcano in South Africa to have been active. Mail us.

Combine some star-gazing with a premier Big Five safari at Ulusaba Private Game Reserve in the Sabi Sand. This top-of-the-range safari lodge has its own observatory, where you can appreciate Africa’s magnificent night skies with rangers who have been trained in star gazing. You’ll also have a very rewarding safari, with twice daily drives into the wilderness, and lots to do in between. Mail us.

At the spectacular De Hoop Nature Reserve in the Western Cape, you can go on a 1-hour star-gazing and star identification excursion, during which you’ll experience the stars and constellations of the remarkably clear De Hoop night sky. You’ll also enjoy nature in all her glory at this beautiful reserve. Mail us.

The Cederberg – a rugged rocky area 270km away from Cape Town – is another wonderful place for star-viewing. Visit Bushmans Kloof Wilderness Reserve and Retreat and if you can, attend one of their periodic star-gazing events led by an expert in the field. This is also a fantastic place for viewing ancient rock art. Mail us.

Kagga Kamma in the Cederberg has a mini observatory where an expert facilitates an incredible star gazing experience during which you can sight the stars, the moon and the planets through a powerful telescope. Mail us.

The Waterberg in Limpopo Province offers fantastic star-watching due to its clear skies and low levels of light pollution. An ultra-luxurious Waterberg experience is offered at Leoba Private Reserve. The award-winning Observatory Bush Villa is an exquisite two-bedroomed bush sanctuary for small groups, and is made available on an exclusive-use basis. Safari drives are not timetabled, but are available as and when guests choose them – by day and by night. Stand by for stargazing in a dome housing sophisticated telescopes that provide views of the moon, planets, other celestial objects and the sun. Mail us.

Marvel at the constellations of the African sky on the star deck at Mhondoro Game Lodge in the Welgevonden Reserve. On a clear night you could see about 2500 stars on the comfy star deck with custom seating designed to enable stargazing. Mail us.

The wide open plains of the Karoo and Klein Karoo were made for stargazing. Guided night tours are available in the area.

De Denne Country Guest House is a four-star country hideaway set on a working ostrich farm just outside Oudtshoorn in the Klein Karoo and looking out across the farmlands of the Olifants River valley and the Swartberg Mountains. After dinner on a cloudless night, your guide will introduce you to the spectacular night skies of this region. Mail us.

The Johannesburg Planetarium, situated on the campus of the University of the Witwatersrand, was the first of its kind in Africa, and only the second planetarium ever built in the Southern Hemisphere. It is open to the public on most evenings, hosting shows such as the ‘In the Sky Tonight’ series, as well as children’s star parties and astronomy courses.

In Namibia, the NamibRand Nature Reserve is the only official Dark-Sky reserve in Africa. In addition to protecting the wildlife of the southwest Namib Desert, this reserve also keeps its light pollution so minimal that the Milky Way is visible to the naked eye. It has been recognised by the International Dark-Sky Association as one of the naturally darkest yet accessible places in the world. The quality of starry nights is truly exceptional. Kwessi Dunes Lodge is situated in this reserve, and has beds that enable guests to fall asleep whilst watching the stars.